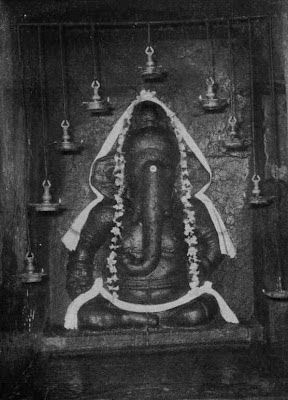 I sing in praise of Vatapi Ganapati, who has the face of an elephant, and who is a giver of all boons. All the living beings worship His feet. He transcends the past, the future and the universe, comprising the five elements. He is devoid of passion, and is saluted by the Yogis  He is the cause of the  creation of the world and He is the remover of all obstacles.

In ancient times, He was worshiped by Saint Agastya (born out of a pot). He resides in the middle of the mystic triangle. He is saluted by the prominent Gods, Vishnu and Others. He resides in the Mooladhara Chakram (cosmic circle). He represents the four forms of speech, beginning with the inaudible Shabdam namely Paraa. His trunk is curved in the form of the sacred syllable Ohm. He is eternal, and His forehead bears the crescent moon. In His left hand He carries the stack of  sugar cane. He also carries a noose and a pomegranate fruit in His lotus-like hand. He is of an immeasurable form, and He is faultless. He is the protector of the meek, and His figure is adorned by the Hamsadhvani Raaga.

Posted by Sathyu at 9:32 AM No comments: