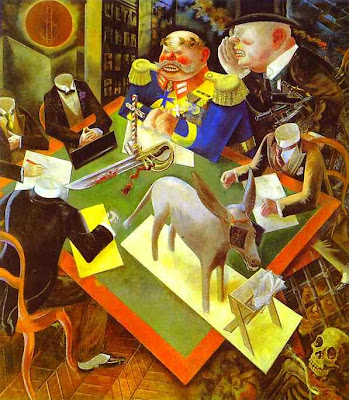 Born in Berlin, George Grosz (1893-1959) was a leading member of the Dada Movement, who later painted many caustic works criticizing the rise of Nazism. Like many artists who fled Europe, Grosz immigrated to the United States and was teaching at the Art Students League in New York. Grosz returned to Germany in May 1959 to live out his days, but died from a fall down a flight of stairs within weeks of his return.
George Grosz’s large masterpiece Eclipse of the Sun of 1926 became available only in 1968, after it was acquired by the Heckscher Museum of Art. The painting is a scathing indictment of the military-industrial complex and of materialism, featuring an industrialist, a general, and four headless members of the bureaucratic bourgeoisie, all under a sun that is obscured by a dollar sign. The donkey atop the table and the dead skeleton strewn on the floor are the tell-tale signs of modern nation-states across the world. Eclipse of the Sun is one of the most important oil paintings of the 20th Century.
Posted by Sathyu at 1:50 PM