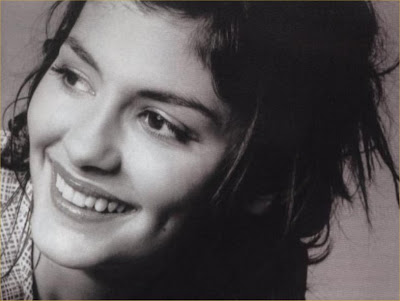 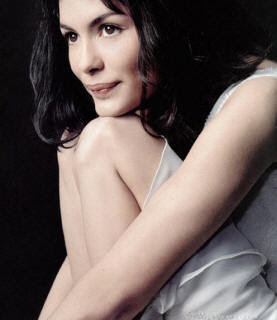 ~ Stills of the French Actress Audrey Tautou ~
It has been a long time since I had a lazy weekend. Without travelling. Without reading. Without any binges or consequent hang-overs. It is indeed fabulous to sleep on and on. To escape the tyranny of the clock has been one of the cherished longings of my life. And I could indulge in such luxuries only once in a while. It certainly helps. To reinvigorate and rescue some sanity from the maddening life. I slumbered this Sunday away and woke up in the middle of a beautiful dream which am not able to recollect. It must have been beautiful for I woke up with a smile inside the quilt. It was dark and the sound of the rains falling from the skies embraced me with a warm welcome, held my hands and took me to the real from the ethereal. Both being unusually tantalising. Like Charles Baudelaire, I was tempted to ask the wind and the wave, ask the star, the bird, or the clock, ask everything that flies, everything that moans, everything that flows, everything that sings, everything that speaks, ask them, what time it is! And the wind, the wave, the star, the bird and the clock will all reply: “It is Time to get drunk! If you are not to be the martyred slaves of Time, be perpetually drunk! With wine, with poetry, or with virtue, as you please.” When I saw the time with a vengeance, it was half-past One in the afternoon. A Cheshire Cat smile adorned my mischievous face, for I felt like having vanquished the wicked tickling time!
The idiot box has resurrected itself with some intelligence after the arrival of two interesting channels : NDTV Lumiere and UTV World Movies. Thanks to the marketing brilliance of Prannoy Roy and Ronnie Screwvala, we get to see some amazing movies from the world cinema. It is a real leap from those good old Doordarshan days when we used to watch the regional Indian movies on Sunday afternoons after the news for the hearing impaired and some world movies on late Friday nights after a long wait. With the advent of the DVDs, this niche market is becoming more sophisticated with the demand and supply chain veering towards a reasonable equilibrium. These days, you can acquire a Fritz Lang or a Jacques Tati, a Wim Wenders or a Fatih Akin with so much ease. This was unimaginable until a few years ago. Hope it should not take much time to get a Pier Paolo Pasolini or a Sergei Parajnov from a Landmark shop, rather than depending upon torrentz downloads and the subsequent sub-titling labour involved in the process. During the last few months, both the Tamil and Hindi film industry have started churning out muck after muck. The latest ones being Mani Ratnam's Raavan and Punit Malhotra's I Hate Luv Stories. With the kind of reviews both had got, I chose to stay indoors and enjoy the rains instead of getting into a masochistic exercise of watching some trash. Surprisingly, during such times, the rain god blesses you doubly well. That is how I got to watch the French movie Priceless on NDTV Lumiere this Sunday.


Jean works as a bartender in a hotel and pretends to be a rich man. He woos Irene, whose sole aim is to enjoy all the riches of life and make it big. She loves to be solicited by the rich and the lonely lot, by trading her seductive company. After a romantic rendezvous with Jean, Irene discovers the real net worth of Jean and dumps him. The forlorn Jean pursues Irene with a few encounters which end up becoming comic rather than striking any warm note in the heart of Irene. Jean becomes a gigolo and gets picked up by a wealthy widow. The wealthy old lady pampers Jean to satisfy her whims and fancies arising out of her need to care and to be taken care of. Jean starts leading his dream-come-true lifestyle, which is otherwise unaffordable. Meanwhile, Irene becomes an escort of a rich patron whose is again lonely and lost in the material world. Both the weird pairs come to stay at the same luxurious hotel. This paves way for Jean to meet Irene on the sly. Irene teaches Jean the art of digging more money and favours from his client. The trick works for a while but gets discovered by the smarter old lady who is a past master in the game. The old lady ends up by merely warning Jean not to act coy henceforth, as she finds herself entangled in her emotions towards Jean. Gradually, Irene and Jean start missing each other amidst their swanky and opulent lives which they have started indulging themselves. During the middle of a night, when their respective clients are fast asleep, both Irene and Jean escape to the sea shore in the vicinity, have champagne and start feeling an overwhelming intimacy towards each other. They wake up at the dawn and without expressing a word to each other, return to the hotel. I leave the rest of the story to be relished by watching the movie only.


What enchanted me the most in the movie is the way the characters are portrayed. The opulence of the rich is not portrayed as villainous and ugly. And the longing for the riches by the under-privileged is not run down over with any moral sermoninising. Both have their own charms and their own truths. Every character is handled with an empathy and a genuineness worthy of itself. Though the movie ends in a happy note with the triumph of true love over money, it has been nuanced with all the richness of the wealthy. A very interesting facet of the movie is that though both the lovers might be sleeping with their respective clients as a professional hazard, they don't moralise about it at all and their love for each other grows more and more passionate. The director has accomplished this with such ease and finesee that one may not find it incongruous in anyway! That is no ordinary feat by the brilliant director Pierre Salvadori. And the real discovery for me is Audrey Tautou. She is a wonder of a human being, encapsulating all the myriad expressions moulded into a single beautiful face. The most memorable character in this movie Priceless is Irene, which has been performed remarkably well by Audrey Tautou. Am yet to watch any of her other famous movies like Amelie, The Da Vinci Code or Coco Avant Chanel, to name a few. Hope to watch them soon.

Simple but endearing romantic movies like this are a delight to watch. Especially when it rains!