The Life & Death Of A Model 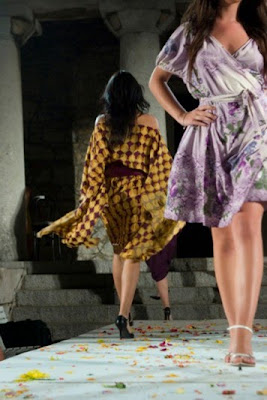 As life unfolded its quirks, she got used to living on a precipice. She was in and out of relationships. She fell apart from the guys whom she loved. For they ended up giving her more grief than solace. Finally she fell apart from herself. From becoming Miss Mauritius in the early 1990s to the voluptuous Kama-Sutra condom ad during the same decade, she had seen it all. Love and relationships, cocaine and champagne, trust and betrayals. She was settling down in Mumbai - an urban phantasmagoria of maddening frenzy. A city which did and undid her. Bollywood did not beckon her. She continued to struggle past her prime to establish herself. Sometime back she had started an event management company with one of her boyfriends. It did not work out. Then she embarked one on her own. And kept dabbling with fashion choreography. Only about a couple of months ago, she met another guy - much younger by age. She began to send him anonymous bouquet of flowers, while they were texting amorous sms-es. Love and passion got exchanged via BlackBerry and FaceBook. Once, he had even promised her total loyalty, to assuage her from her spiralling bouts of insecutiry. She began to nurture the obsession of matrimony in her mind. Probably as a panacea to all the ills of a failing life. As a therapy to her fractured soul.
He was just in for a fling. Being a serial-dater, he revelled in lavish parties and in the company of the bold and the beautiful. Simultaneously involved with others as well. When she confronted him head-on, he confessed her that he was not ready for any real commitment. What she might have apprehended all along would have been spelt lucidly by him in black and white. A dreaded nightmare came true, shattering all the castles in her mindscape. A bloodied altercation followed that night. He left her flat and drove his car back home, safely. After many hours of trauma and turbulence, she scribbled in her diary, 'Why are you not able to understand me..Will I've to be reborn for you to understand me..You've become dear to me in such a small time..Why can't you even give me a small place in your life..', appending his name in between those broken lines with a final sentence, 'You killed me..', before sedating herself more. Not to take any chances, she opened her gas stove on. She then took a rope and hung herself. When the door was broke open after more than twelve hours, they could immediately find only four of her six pet cats. They other two were found much later - hiding, shivering and scared. Their fond eyes carried away with them, the multiple truths and manifold tales in the life of the dusky exquisite damsel Viveka Babajee, into the eternal highway, which she had always longed for.
Modelling is no easy job. It is a tough career to opt for. The competetion is cut-throat. Slips are too many. And the speed to catch up is dizzying. The fashion industry is a complex labyrinth. Young people with chiselled bodies get caught in the whirlpool of desire to make it real big and earn a good lot of money. And not just the brawn. Even their brains are sharper. They are as clever as any fellow competitor in any other domain of modern existence and its varied markets. Many models in the post-liberalisation scenario are deft in playing the dubious game with mind-blowing ruthlessness and astonishing aplomb. They do not yell as seriously hilarious as Cuba Gooding, Jr. and Tom Cruise did in that memorable Jerry Maguire, but simply hiss into your ears with a spine-chilling sternness : show me the money! Strange but true, the archaic notions of feminism are being forcibly redefined. The fashion industry and modelling world do not simply stereotype women into the dominant narratives as stipulated and fantasised by the Western Anglo-Saxonic White male gaze. They do not dumbly prejudice the younger generation of girls, guys and LGBT to ape the unrealistic physical beauty standards resulting in a skewed relationship with their body images. On the contrary, it has opened up a plethora of multicultural spaces for the Black, the Brown, the Yellow and the Rainbow coloured to create their own stratagems of empowerment. Encompassing all the genders and the transgendered. In fact, this is the only post-modern domain where gender-bender is at its exuberant zenith!
Life is not always beautiful. In the developing Afro-Asian world, the social moorings still play a crucial role in shaping the destiny of individuals. They classify successes and failures in an insidious and topsy-turvy manner, wrecking havoc in the lives of many a sensitive beings. One should be shamelessly thick-skinned and psycho-pathologically tough to survive the prodding and the beating. Being complicit with all the murky games of existence is no easy task. To piece together the splintered self and yet to prance around with a smug smile takes a heavy toll. Body and soul. Some might be able to make it. And some might flounder and fall down on the wayside. It is not because of one's inherent strength or weakness that they happen. The question of Chance versus Necessity haunt and baffle humanity from the times of Plato's dear bete noire Democritus to Jacques Monod. It is easy to pontificate as to why Viveka Babajee should not have committed suicide. There may be dime a dozen reasons and logic as to how she ought to have continued to live like the rest of us. Probably she should have got married to a wacko and lived a dead life. Is it so Herculean to learn a few basic tricks and professionally manage the matrimonial show? I do not intend to be judgemental about her suicide. It's her life. And she has exercised her sacrosanct right to die. It is unfair and tragic. But it is her deliberate choice. So be it.


Not all suicides are as honourable and heroic as the seppuku or hara-kiri of a Japanese Samurai. In most of the cases, it is the consequence of unbearable pain and anguish, loneliness and misery. To take the ultimate step of annihilating one's own victimised self by physical extermination is excruciating. The theoretical underpinnings of karma and reincarnation, which are common amongst most of the ancient religions, do not endorse the idea of suicide. But the tormented self, who opts for such an extreme step of suicide, might probably be longing to transmigrate into a better soul and body in the forthcoming rebirth. But I wonder if at all any longing would exist at that stage of despondency. Who knows. On this planet Earth, millions of species are born and dead during every second of the maha kaala chakra. Human species is just one of it. Nevertheless, each life of every species is precious and sacred. The mystical experience called death should happen as natural and as celebratory as life. That can be our only prayer. The least that life can expect from any responsible being is that one should not get caught in a vicious trap of one's own making in the name of some so-called love, upstart materialism and half-baked spirituality. Finally ending up vainly in such a futile exit. The suicide of Viveka Babajee disturbs us more than the hundreds of other deaths that we read everyday in the media. Naturally so. Because she is part of our aspirational middle class, with the same value systems, dilemmas and hypocrisies. She is one of us. We share similar dreams and delusions, fantasies and nightmares, successes and failures. More than that, it makes us feel indirectly guilty as well. For we have devoured the erotic images of Viveka Babajee like rodents in lurch. Objectified her body and consumed it hardcore. Her suicide has exposed certain disconcerting fault-lines in our sanctimonious double standards regarding love, sex and marriage. But we would surreptitiously camouflage it in order to go around with our saccharine deceptions. And we shall label it as successful living.  Andy Warhol, the towering figure of the pop-art movement had prognosed in the late 1960s that, in the future, eveyone will be world-famous for fifteen minutes! Sadly in the case of Viveka Babajee, it has become posthumous.